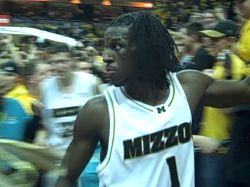 Missourinet Sports Director Bill Pollock gives you an all access peek at a Missouri Tiger basketball ( YouTube ). See what happens before and after the game inside the tunnel and on the court.

I get asked quite a bit from friends and family what it’s like covering sporting events and what goes on behind the scenes.  Many times people are surprised when I tell them that I can basically go wherever I want, I can have as much as I’d like to eat or drink and I get to see things the average fan doesn’t.

So during the Missouri Tigers final home game of the year, I thought I would shoot some video to show you what happens on a game day from the media, players, mascot and cheerleaders.

I’ll show you the media room where TV, radio, and print journalists hang out before the game.  I’ll take you outside the Tigers dressing room.  You’ll see everything from freshmen Kim English who is loose and ready to roll to the focus on the face of senior Matt Lawrence.

We’ll go behind the scorer’s table, listen to the starting lineups and the Mizzou pep band, and get right in the middle of the Mizzou cheerleading squad.  (I’m serious!)
We’ll also head back to the media room after the game to hear some comments from DeMarre Carroll.

Oh, one funny thing to note while I was watching the video.  Look for OU’s Blake Griffin and his strut off the court after the game.  Hey buddy, you guys just lost, I wouldn’t be so cocky.  (Of course, if I knew I was going to be a lottery pick in the NBA, I’d probably walk like that too).

Instead, after the game I loaded up my gear, drove home and got to bed at midnight, so I could be back at the Missourinet bright and early the next day at 4am. I hope you enjoy.