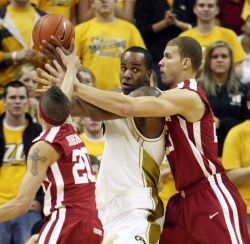 Mike Anderson started his four seniors including his son Michael Anderson Jr. and on this emotional night, the seniors came out roaring jumping out to a 13-5 lead.  From that point on, 15 th ranked Mizzou never slowed down beating  4 th ranked Oklahoma 73-64.

The Sooners started the second half on a 6-0 run two and a half minutes in, prompting a timeout from Anderson,  cutting the Missouri lead to five.  After the timeout,  Mizzou was able to build the lead up to nine with just over 15 minute to play.  JT Tiller picked up his third foul and needed to come out.  Up to that point Willie Warren was held to just three points on 1 of 5 shooting.  Things wouldn’t get much  better for Warren and the Sooners.

At that point, the Tiger defense took over forcing three straight OU turnovers.  Mizzou jumped out to a 15 point lead 49-34 with 12 minutes to play.  The Tigers kept that lead until three minutes to go when Tiller got called for his fourth foul and a three point by Austin Johnson.  Johnson it all three free throws to cut the gap to 66-59.  Tiller went to the line with 2:38 when Mizzou went into the bonus and made both of his free throws to push the lead back to nine.  Off a Johnson missed three, Tiller hit an outlet pass to Carroll who had an easy lay in and the crowd could sense the win.  Each time OU put together a run, Mizzou had an answer. 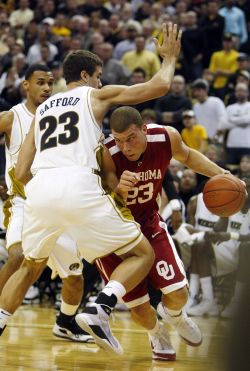 The first half may have been one of the most balanced nights for Mizzou in terms of scoring.  It was also one of the fastest starts Mizzou got off to this year.  8 players got on the score sheet in the first half.  There was no slowing Blake Griffin, but the Tigers limited the damage from the outside shooters.  The Sooners shot just 3 of 20 outside of the Griffins.

Lyons and Carroll led the Tigers with 15, followed by Tiller with 13 and Zaire Taylor’s 10.  The Tigers could not do much to slow down the Griffin boys who combined for 30 of the Sooners  64 points.  Blake Griffin ended with a team high 16 points and 21 rebounds, but outside shooting was off as OU was just 4 of 18 on threes.  The Tigers also forced 22 turnovers which has been Mizzou’s bread and butter all year.