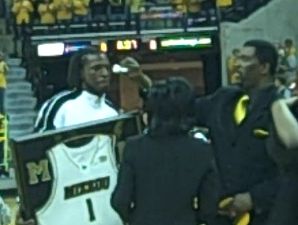 It was a perfect night for Missouri Tiger fans and their basketball program.  They couldn’t have scripted a better night for the four seniors on Mike Anderson’s squad.   Check out the video of their Senior Night Ceremony

DeMarre Carroll who has started every game this season, along with Leo Lyons who missed a couple of starts,  joined Matt Lawrence and Mike Anderson Jr. for an emotional pregame ceremony.

It was a proud moment for Coach Anderson has he escorted his family along with his son to center court.  Junior took advantage of his five minutes of playing time at the start getting a rebound, an assist and two steals as the Tigers jumped out to 13-5 lead.

The emotions got the best of Carroll who had tears streaming down his eyes.  He gave a lot of credit to Mike Jr. for the team’s fast start and after the game said he will always be a Missouri Tiger, but couldn’t talk more about the night afraid that he would break down again.

Matt Lawrence was choked up as well.  Lawrence is closing in on becoming one of Mizzou’s all-time great three point shooters.  Lawrence needs just nine more three’s to move into the Big 12’s top ten.

Anderson said he’s always loved Leo and has been impressed with the way Lyons has matured from a kid who didn’t care too much about school to becoming a man who has taken on more responsibility.  I got the feeling that Anderson has always felt that Lyons has been his special project.

Listen to their comments on Senior Night.