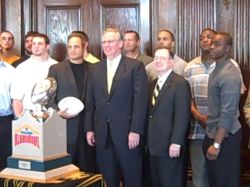 The Missouri Tiger football was recognized for their accomplishments this past season at the State House and Senate.  They also paid a visit to the Governor’s office where they posed for picture and got a pep talk from their number one fan.  I have video of the visit.  (click on the photo).

Governor Jay Nixon posed for pictures and congratulated  and congratulated the student-athletes for their athletic and academic accomplishments and took time to offer up some advice.   The piece that I walked away with was how he told these players that playing football at Missouri was just a small chapter in their life, but how the lessons they were learning on the field and in the classroom would pay dividends for them later in life.

He admired their commitment to the football program and the pressure that goes along with performing in front of 60,000 people each week.

Following their 30-23 overtime victory in the Alamo Bowl, the Tigers finished the season 10-4, ranked 19 th in the final AP poll and 16 th in the Coaches’ poll.  This was only the third 10-win season in Mizzou history and the first time since 1968-1969 that Mizzou has finished consecutive seasons in the AP’s top 20.