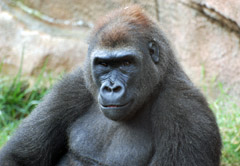 Officials at the St. Louis Zoo are investigating the death of an eight-year-old gorilla. Muchana was found entangled in a rope in his sleeping quarters on Saturday. Efforts to revive him were unsuccesful.

Officials say ropes are commonly used in ape habitats to provide the animals with an enriched place to climb and play. Muchana’s death comes less than two weeks after Cinder, the hairless chimpanzee, died unexpectedly at the St. Louis Zoo.