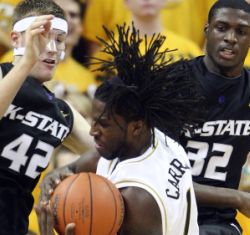 Matt Lawrence had a big first half hitting all three of his long range attempts and DeMarre Carroll (photo by Bill Greenblatt, UPI) led five Tigers in double figures with 21 points as Mizzou cruised to a 94-74 win over Kansas State at Mizzou Arena.

Justin Safford came off the bench and had a huge slam then grabbed an offensive rebound and picked up a foul which put Missouri in the bonus with 8:43 left.  Safford made one of the two giving the Tigers a 24-13.  Mizzou then scored 25 points in the final six minutes including Laurence Bowers who scored six points in the final minute to give the Tigers a 55-32 halftime lead.

Lawrence had 12 at the half, Bowers and Tiller with 10 apiece.  The three point shooting that was key in K-State’s first win disappeared as the Wildcats were just 2 of 10 from three in that first half.

The Tigers pushed their lead to 70-38 up to the first TV timeout of the second half, then K-State went on a 15-0 run as Mizzou got a little careless midway through the half.  Head coach Mike Anderson talked about how K-State came out and punched Mizzou in the first game and the Tigers didn’t punch back.  Tonight, the Tigers came out swinging and never stopped until the game was well in hand.

Earlier in the week, Anderson called Carroll, the "heart and soul" of this team and called him the ultimate warrior.  One thing about Carroll is he scrapes and claws for every rebound, loose ball and defensive stand.

The energy the Tigers showed tonight will be the same type of effort needed this Saturday at Kansas.