Lieutenant Governor Peter Kinder (R-MO) and legislative leaders are expressing concern over strings that are attached to the federal stimulus money that could be headed to Missouri to help with the unemployment situation. Kinder says no one really realized what was in the bill because no one had actually read it before voting on it. 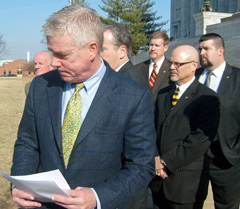 Kinder was those taking part in a Wednesday morning news conference outside the Capitol say in order for the state to accept federal dollars for unemployment benefits, the state must change its unemployment compensation laws to put added financial pressure on businesses. Legislative leaders say they have no interest in taking money like this with strings attached.

"The American Recovery and Reinvestment Act of 2009 stipulates that states must have permanent revised law in place to deal with unemployment compensation," says Kinder. "The Act calls for states to extend benefit periods beyond normal terms and also opens up unemployment benefits to persons not eligible under current state law."

Senate Leader Charlie Shields (R-St. Joseph) fears that while there will be some immediate relief to deal with the unemployment situation, the federal government demands much more in the future.

"There will be dollars that we turn away because there are so many strings attached that it creates problems within our state," states Shields. "And we can’t sustain something after those dollars leave our state, and this is perfect example."

Shields adds, "There are times when the cure is worse than the illness and this may be one of those cases where the strings that come attached to this create more problems than the money actually provides."

Missouri Chamber of Commerce President Dan Mehan, who took part in the news conference, takes exception to what he sees as a new mandate requiring businesses to put more money into the Unemployment Insurance Trust Fund.

"Employers pay a tax to fund the Unemployment Insurance Trust Fund from which benefits are paid – that is the pot of money that funds unemployment insurance in Missouri," says Mehan. "So, it would be a tax increase … and it would be shouldered by Missouri’s small and large businesses."

Senate Republican officials have put together a summary of the federal stimulus provisions as they pertain to unemployment money. The summary states that while the time period during which benefits would be paid will be extended, along with an additional $25 weekly benefit, other unemployment-related dollars would only flow to Missouri and other states if permanent legislative changes are made.