On the gridiron and on the basketball court there’s not too much cooperation between Missouri and Kansas, but things appear to be different in the political arena. Senate President Pro Tem Charlie Shields (R-St. Joseph) met Monday with Kansas Senate President Steve Morris to discuss ways in which the neighboring states might cooperate to improve the economies of both states and to create jobs. 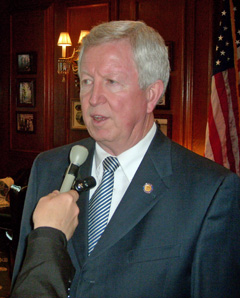 The two Senate leaders met for about an hour. Morris then met with the Republican Senate caucus. Among the issues discussed was the expansion of job opportunities in the bi-state Animal Health Corridor by encouraging new companies to locate there.

They also discussed the combining of purchasing powers as a means of sharing resources and reducing costs in such areas as the buying of road salt by each state’s transportation department.