She’s not ready to announce her candidacy, but former State Treasurer Sarah Steelman is giving strong hints that she’s preparing to toss her hat into the ring to challenge Congressman Roy Blunt for the Republican Party nomination to succeed Senator Christopher "Kit" Bond in the U.S. Senate. 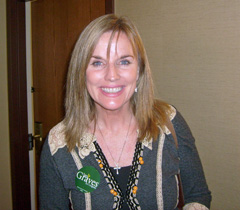 Those she was not part of the official program, Steelman and her husband, David, made the rounds of the hospitality suites Friday at a downtown hotel in Kansas City – the site of this year’s Republican Party Lincoln Days weekend.

Asked about Congressman Blunt’s performance on Capitol Hill in Washington, Steelman took the opportunity to blast the Congressman over his support of the initial bailout bill that has failed to being the hoped for relief.

"Well, I thought the bailout vote was a disaster when it happened," said Steelman, "I couldn’t understand why Republicans were reporting that."

And, Steelman says there is support for her possible candidacy. "I’ve had a lot of people come to me and say, ‘Hey, you know, we were with Kenny Hulshof. But this time, if you run, we’re gonna be with you.’"

Steelman gives no indication when she might be ready to announce one way or the other.