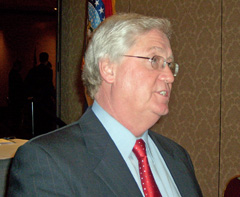 Smith is currently Congresswoman Jo Ann Emerson’s Chief of Staff and has worked with Congresswoman Emerson or her late husband Bill Emerson for 28 years. Smith has also worked for Senator Jim Talent and for the George W. Bush campaign.

Smith will leave his post with Emerson to take on this new role that is a full time job. He’ll ease into the new job and take full control in the next month or so.

Smith succeeds Jared Craighead, who took over as Executive Director of the party in December of 2005.