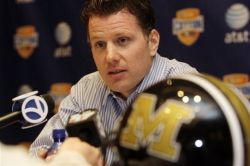 According to the St. Louis Post-Dispatch, Missouri Tigers’ defensive coordinator Matt Eberflus is leaving to become the linebackers coach for Eric Mangini and the Cleveland Browns.  Eberflus came with Gary Pinkel to Mizzou eight years ago.

Eberflus was often criticized for the Missouri’s defense the last couple of seasons, but the year the Tigers won the Cotton Bowl, I thought Eberflus did a good job of simplifying the defense after the non-conference schedule and as the season went on, that defense became much more improved.

Heading into last season, there were even higher expectations placed on the defense, but in retrospect, the defensive personnel we not as good as the year before.  With Lorenzo Williams off that defensive line, Stryker Sulak was the only linemen who put consistent pressure on the quarterback and he was undersized for DE.  The DBs were then exposed and they didn’t get enough help from William Moore at safety because he was hobbled by injuries.

When your program is successful, your top assistants get noticed and plucked away.  Gary Pinkel replaced Dave Christensen, his offensive coordinator with QB coach David Yost after Christensen left for Wyoming after the Alamo Bowl.