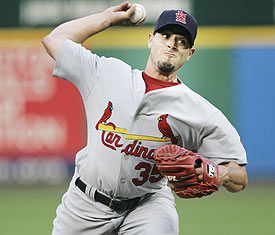 After Joel Pineiro came out and publicly blasted Cardinals’ third base coach Jose Oquendo for leaving him off the Puerto Rico starting rotation for the World Baseball Classic (which Oquendo will manage), Cards’ skipper Tony LaRussa made it official that Pineiro will be the number five starter.

This is the first time since 2005 that LaRussa has his starting rotation figured out early in Spring Training.  With Chris Carpenter’s rehab coming right along and Adam Wainwright, Kyle Lohse and Todd Wellemeyer locked in the rotation, the only question mark was Pineiro, but it appears that’s been answered.

LaRussa told stlcardinals.com, "I think Joel is in our rotation, and from what I’ve seen of how he’s throwing and the shape he’s in, I expect he’ll pitch well."

This may not leave Mitchell Boggs, who was battling early shoulder tightness and reduced to long toss as a long shot for middle relief.  As I see the bullpen, they have Jason Motte, Chris Perez, Ryan Franklin, Brad Thompson, Kyle McClellan, and off season acquisition Trever Miller.  That leaves Boggs to battle with Josh McKinney, Charlie Manning, and Royce Ring to battle for that last bullpen spot.