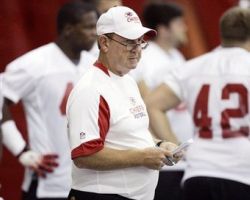 We can officially announce, new Chiefs head coach Todd Haley has retained Chan Gailey as offensive coordinator.  The question remains, who will call the plays, whether it’s Haley or Gailey, that is still for Haley to decide.  Still no word on a defensive coordinator.

Haley has not named  a defensive coordinator.  He brought along Clancy Pendergrast who was let go by Arizona and he hired New Orleans defensive coordinator Gary Gibbs.  From what I’ve read, Haley is waiting to see if they go with a 3-4 or 4-3 lineup.  If you don’t know what that means, a 3-4 is three down linemen and four linebackers, 4-3 means they line up two defensive ends and two defensive tackles and have three linebackers on the field with four defensive backs.

The Chiefs also added veteran coach Maurice Carthon to Haley’s staff. Carthon was the running-backs coach for the last two seasons for the Arizona Cardinals, where he worked with Haley.