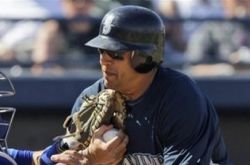 While Mark Teahen battles Alberto Callaspo and Willie Bloomquist for the starting second base job, the Royals acquired another middle infielder off waivers yesterday, getting 26 year old Tug Hulett.  Hulett played in 30 games last year with the Mariners.

Hulett can play all the infield positions, but at this point it won’t clog up the battle at 2 nd base.  Manager Trey Hillman told kcroyals.com, “I wouldn’t count him out because I don’t know what’s going to happen but it’s certainly not a priority with me with what we already have and are looking at there.”

If the last name Hulett sounds familiar, it is.  His dad Tim played 12 seasons with the Cardinals, White Sox and Orioles.

Hulett was added to the team’s 40 man roster and to make move they had to designate relief pitcher Neal Musser for assignment.

Jose Guillen, who came into camp looking fit, has some nasty looking toes.  He had an ingrown toe nail. He didn’t wait for the team doctors to take care of it, he cut the nail himself.   It feels better, but he’ll miss a couple of days.  I love how the media asks about every little detail, forcing Hillman to explain an ingrown nail “We have a very nasty ingrown toe with Jose Guillen. It’s going to slow him down to some degree.  We’ve all had ’em, but this one’s nasty. I believe it’s on his right big toe. The nail got cut wrong, and it’s grown into areas it’s not supposed to grow into, and it’s very painful for him right now.”

Enjoy your breakfast after that thought.

Previous Post: « Haley keeps Gailey in KC, but who will call the plays
Next Post: Reports out that Eberflus is leaving Mizzou »