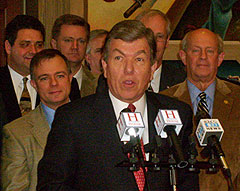 Four campaign stops were scheduled this day for Blunt – starting out in St. Louis, then to Jefferson City, to Cape Girardeau, and finally to Carthage – where the Congressman praised the current holder of the seat and vowed to do all he can to keep the seat in Republican control.

"Clearly, the fight is in the Senate," said Blunt during his Jefferson City stop at the State Capitol, slamming the federal stimulus package and lamenting the fact Capitol Hill Democrats can put together the numbers to push through just about any piece of legislation they want passed.

As for qualifications, Blunt has no doubt he is most qualified for the post.

"I think I bring to this race an established set of principles," said Blunt. "A very transparent record in the House and a commitment to seek bipartisan solutions. And, whether it was tax policy or the Combat Meth Act or the Charitable Giving Act or the Foreign Intelligence Surveillance Act – all of those involved bringing Democrats and Republicans together and getting something done."

Asked whether he is concerned he might be challenged by former State Treasurer and former GOP gubernatorial candidate Sarah Steelman for the Republican nomination, Blunt said, "The politics of just trying to talk about slogans instead of the future will not be the politics of 2010."

Previous Post: « Westminster softball steps up to the plate for local girl
Next Post: Alzheimer’s grant to help with early-onset dementia »