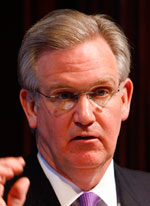 No hard numbers yet, but Governor Nixon has outlined his vision for how money flowing to Missouri from the federal economic stimulus package should be spent.

Nixon calls his vision for spending the stimulus money the Transform Missouri Initiative. He unveiled it Wednesday during a news conference in his Capitol office. The initiative breaks down into three broad categories: human capital, infrastructure and emerging technologies.

The governor stated that the $787 billion federal stimulus package gives Missouri the opportunity to undergo a complete economic transformation. Nixon explained that thousands of Missouri workers lack the proper training for high-tech jobs, that the state energy grid lacks the capacity to carry all the power the energy system produces and that more than a million Missourians don’t have access to broad-band Internet.

Nixon brushed aside recent comments by legislators that if too many strings are attached to the money, the state should send it back to Washington.

"Whether you like the federal bill or not, whether you would have voted for it in Congress or not that is rear view mirror stuff and that’s long since past. We passed that mile marker yesterday (Tuesday) at 1:30," Nixon stated. "We are now in the future.  And in the future, just like yesterday (Tuesday) we were the first to compete, I’m committed to competing for all these competitive dollars, to maximize them and move the economy forward. I do not think that we should walk away from this once in a generation opportunity."

On Tuesday, MoDOT began construction on a central Missouri bridge with stimulus dollars, the first transportation project in the nation to be funded through the stimulus package.

Nixon has laid out a vision. He said he looks forward to working with the legislature to flesh out that vision.

"This is about a collaborative process, where we all as a group decide that we’re going to be a part of something real and something significant," Nixon said.

Missouri is expected to receive approximately $4.3 billion from the stimulus package, according to figures released by the National Conference of State Legislatures in coordination with the National Governor’s Association. The federal bill contains a total of $46 billion for transportation with approximately $822 million designated for Missouri. Other parts of the package offer competitive grants and promise more money to states with projects in position to begin immediately. [Photo: Bill Greenblatt/UPI]