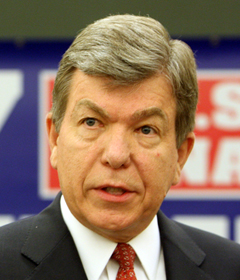 Blunt will make a series of appearances throughout the state over the next couple of days, starting in St. Louis and moving to Jefferson City on Thursday. He’ll head to Kansas City on Friday, where the Missouri Republican Party will hold its annual Lincoln Days event.

Blunt has won statewide office before, having been elected Secretary of State in 1984. He served in that post until 1993. Blunt first won election to Congress in 1996, eventually moving up the ranks to become Republican Party whip.

There is speculation former State Treasurer Sarah Steelman (R-MO) will also run for the GOP nomination.

On the Democratic side, Secretary of State Robin Carnahan (D-MO) has announced her intention to run for Bond’s U.S. Senate seat. [Photo: Bill Greenblatt/UPI]