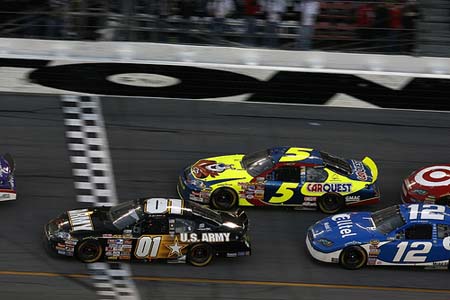 The start of NASCAR’s season begins with what I think is the most popular and exciting auto race in America, yes even surpassing the Indy 500, and that is the Daytona 500.

I was thumbing through a car magazine the other night while my wife was getting her hair done and it was pretty cool to read about the early days of Daytona that was started up by Bill France.  Everything from the parties, the women, the booze, to these guys taking over the beach, parking cars on other people’s property and needing to get the race in before the high tides came.

It obviously has changed a lot.  One of the most complicating things about the race is the qualifying, so I’ll try to break it down for you as easy as possible.

First, coming out of Pole Day this past Saturday, one thing for sure is that Martin Truex Jr. and Mark Martin will start 1-2 on Sunday.  Then we also know that the top 35 teams from the 2008 owner standings are guaranteed a spot in the race.  From the two 150 mile races that take place today, the top two finishers advance who are not among the top 35 from last year.

That gives 39 qualifiers and the final four spots either go to last year’s winner (if needed) and/or the four fastest drivers from Pole Day to round out the field of 43.

As far as the starting order, based on the finish of the first duel, the top 35 drivers, plus the two highest finishers outside those top 35 will make up the odd number starting positions.  The same is done in the second race for the even number positions.

I’ve read this over and I’m still confused, so what I’m going to do today is just wait until they run the races and wait for NASCAR to set the field of 43, because trying to follow those rules can make your head spin.

As your watching, Joplin native Jamie McMurry will start the first duel from the 12 th position.  Columbia native Carl Edwards will start from the 14 th spot in the second race.   The first race starts at 1pm today.