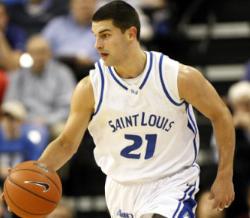 The St. Louis Billikens have reached 15 wins in just the second year under coach Rick Majerus following their 69-61 win over Charlotte at Chaifetz Arena.  The Billikens have now four in a row and need to stay hot if they want a chance to dance.

SLU senior guard Kevin Lisch scored a team-high 18 points, all of which were scored in the second half, on 5-of-10 shooting from the field and 4-of-7 from the beyond the arc.   Kwamain Mitchell added 14 points, including 8-of-10 from the free throw line, while Tommie Liddell III chipped in with 13 points and Barry Eberhardt added 11.

The Billikens turned a 10 point deficit into a 16 point advantage in the span of 22 minute that covered the final ten minutes of the first half and 12 minutes into the second.  The Bills shot 57% in the second half.

SLU has six games remaining, three at home and three on the road before the Atlantic 10 conference tournament.  Four of those final six games will come against teams ahead of them in A-10 standings with a game on Saturday against Rhode Island and matchups with Duquesne, Dayton, and St. Joe.