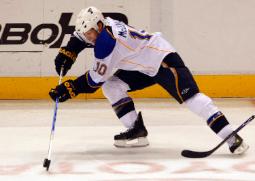 It has been a good week for Blues forward Andy McDonald.  A day after signing a four year, $18 million contract, McDonald returned to the Blues lineup for the first time since fracturing his ankle to score a goal and an assist.

But the Blues gave up three goals after McDonald’s seventh of the year gave St. Louis the lead and lose 6-4.  McDonald said after the game he was a little rusty, but it looked like his return was going to give the Blues an early boost.

They came out and got first period goals from Steve Wagner and Brad Boyes.  Vancouver made a strong comeback in the second period thanks to two tap-in goals by 37 year old vet Mats Sundin.

The big blow came in the third period when the Canucks scored three goals in a span of eight minutes…the last by former Blue Pavol Demitra with :09 left.