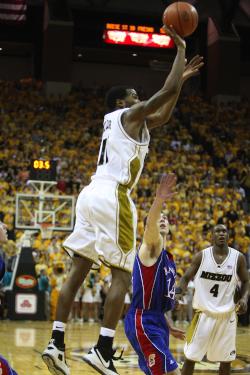 It wasn’t pretty, but it was still a win. Zaire Taylor’s jump shot with 1.3 seconds left gave Missouri a 62-60 win over Kansas.  It was one of those ugly nights for both teams, but it was KU that put themselves into position to win, but couldn’t close the deal.
Mizzou took a 60-58 lead, their first of the game since early in the first half, in the final minute. Mario Little hit a baseline jumper with a hand in his face to tie the game at 60 with 29 seconds. Out of the timeout, Mizzou set up a play and found Taylor open on the right wing as he faked, stepped in and released a 10-footer with his jumper bouncing in to give Mizzou the win. It was one of the few offensive bounces the Tigers got in the game.

Kansas made careless plays in the second half watching a 14 point halftime lead shrink to three, before KU went up by 11 with under 10 minutes to play, then as many as seven with under four to play.

KU coach Bill Self said his team took a lot of bad shots and didn’t attack the basket in the final five minutes. It looked like they were standing around, running a perimeter offense trying to eat some clock. MU coach Mike Anderson said it was fatique. I agree with him, because KU wasn’t getting the rebounds they were earlier in the game and their free throws started looking flat.

Self felt his team didn’t get the ball inside to their big center Cole Aldrich who was just 3 of 8 for 8 points. He did clean up on the boards bringing in 15 rebounds while KU outrebounded MU 48-28.

In the first half, Mizzou could not get the ball inside thanks to Aldrich who did a great job for KU in clogging the lane. While they settled for outside shots (which&were&open)& nothing would fall. Meanwhile, KU pounded the ball inside and built that first half lead to 14. Mizzou shot just 7 of 29 in the first half and made just 1 of 10 from three and just 2 of 14 for the game. 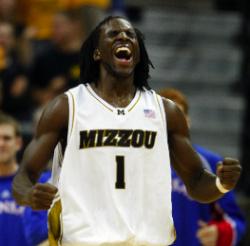 DeMarre Carroll led the Tigers with 22 points on 8 of 13 shooting. Leo Lyons had 13. Again, it was an effort where different players stepped up at different times. The game didn’t start out very well for either team who looked nervous and out of synch. Neither team scored for the first five minutes of the game.  The Tigers built a five point lead six minutes into the game going up 11-6. Then KU started controlling the game from that point, mostly due to the Tigers cold shooting. (DeMarre Carroll yells after one of his jump shots, drops after nearly bouncing out late in the game, Bill Greenblatt, UPI).


After the game Anderson looked at the stat sheet and shook his head, "Our guys just wanted it at the end…what can you say, they outrebounded us by 20, but we forced the national champions into 27 turnovers. Stats don’t always tell the story…this was a team effort."