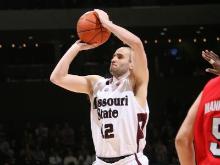 Missouri State University announced Monday that men’s basketball player Shane Laurie will miss the remainder of his senior season after suffering a concussion in Saturday’s home game against Southern Illinois.

The 6’2, 193-pound guard missed the team’s first 11 games after sustaining a concussion in a scooter crash near campus on October 3.  He also suffered a pair of concussions earlier in his career, which led to the decision to end his basketball career after Saturday’s injury.

Laurie played in 12 games for Missouri State this season and averaged 3.5 points and 2.0 rebounds.