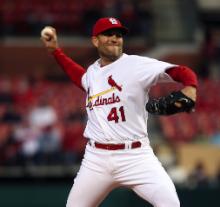 The Cardinals’ Central Division rival Milwaukee Brewers are expected to sign starting pitcher Braden Looper to a new contract today.  Looper was not re-signed by the Cards after three seasons.

With Chris Carpenter’s health still a question mark, I was surprised the Cardinals didn’t keep Looper around.  After one year of working in the bullpen, the Cardinals took a chance and moved Looper to the starting rotation.  In the last two years, he was 24-26 and gave the Cardinals a lot of innings, throwing 199 last year and 175 the year before.

Perhaps the Cardinals were not impressed with Looper’s ERA which has been well over four the last two seasons.  The Brewers thought they had a steal when they nabbed Jeff Suppan away following the Cardinals 2006 World Series, but he is 22-22 in his two season in Milwaukee following his three in St. Louis where he went 48-26.