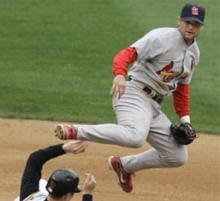 Once a player gets in Tony LaRussa’s doghouse, it’s tough to get out and that’s what happened with Adam Kennedy.   After the Cardinals couldn’t trade Kennedy and his $4 million contract this winter, the team released him late Monday.

Kennedy felt he would be the starter at second base, but LaRussa was not ready to just hand the job over to him.  Kennedy could just never win over LaRussa ever since a disappointing 2007 for Kennedy when he hit just .219.

Just yesterday morning I had written about Skip Schumaker getting an opportunity to learn second base and couldn’t understand why they would move Schumaker to 2nd with Kennedy in place.  Now, that position becomes a little clearer.