Right now, a driver can’t be pulled over and ticketed just on the premis of not wearing a seatbelt. 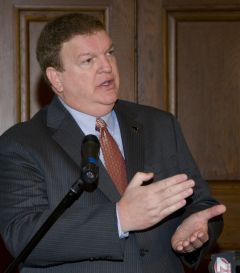 If the legislature passes a bill backed by MoDOT, that will change.

Missouri Department of Transportation Director Pete Rahn says thousands of lives have been lost since 2005, the year he first tried to get the legislature to pass a primary seatbelt law.

Rahn brought a list of deceased to a recent press conference.

"Two thousand, one hundred and eighty three people have died on our highways unbelted," he says, noting that if Missouri had a primary seatbelt law in place in 2005, "360 of these names would not be on this list."

Rahn says states that have passed a primary seatbelt law have seen about an 11 percent increase in usage. He says in Missouri that would save about 90 lives a year and prevent about a thousand injuries.

Missouri currently has a secondary seatbelt law, meaning motorists can be ticketed for not wearing one if they’re pulled over for another traffic violation.

Rahn says heightened public awareness, advocacy programs and legislators being personally affected by traffic deaths and injuries to those not wearing a seatbelt may make the difference in whether the bill passes this year.

He says the good news is that Missouri saw a 24 percent reduction in highway fatalities in 2008, a result of MoDOT road improvements.