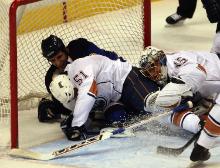 Jay McClement scored a shorthanded goal and the Blues outshot Edmonton 34-23, but lose a 2-1 final after giving up two goals in the overtime shootout.  Robert Nilsson and Sam Gagner scored for the Oilers.  Dwayne Roloson shut down Brad Boyes and TJ Oshie.

Roloson played well, but got help from his defense all night (photo by Bill Greenblatt, UPI).  Chris Mason, getting the start for the Blues played well, giving up a late second period goal to Sheldon Souray.  The Blues would tie the game with his goal early in the third.

The Blues are now 5-1-3 in their last nine games and remain in last place in the Western Conference, seven points away from one of the eight playoff spots.