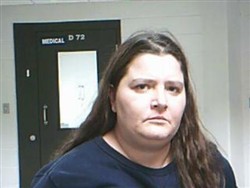 Paula Hall of Sparta was charged with first-degree murder in the November 2003 slaying of Freda Heyn of Oldfield. The trial was held in Taney County on a change of venue.

During closing arguments late Wednesday, Prosecutor Ron Cleek said he was ashamed and not proud of some of the witnesses he had to call to the stand, but it was his job to call them — people with various drug and theft convictions — who had some knowledge of the crime either before, during or after the fact.

One of the last witnesses called to the stand was Drew Wood of Christian County. He said David Epperson told him "he killed an old woman."

Second-degree murder charges were dropped against Epperson months ago — he’s now charged with tampering with evidence.

During closing arguments Cleek displayed a photo of a smiling Heyn to the jury. She was 68 when she was killed, and her head cut from her body. The body has never been found but her skull was located in spring 2004 in the Mark Twain National Forest south of Chadwick.

The defence said in closing arguments that Epperson, called by the defence as the prosecution’s star witness, changed his story four times after DNA evidence first connected him in 2006 to blood found at Freda Heyn’s home on Highway T.

It’s believed Heyn was assaulted and taken from her trailer home to Epperson’s house where she was beaten in the head with a golf club wielded by Hall. A third person in the case, Billy Wayne Hall, is now serving time after pleading out to drug charges.

Cleek is not seeking the death penalty in the case against Hall. She could be sentenced to life in prison.