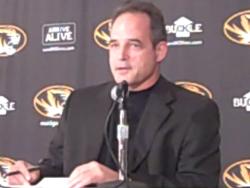 It’s official.  The 2009 recruiting class for the University of Missouri football team has been finalized.  Even more pleasing…there are no major surprises that caught the program off guard.  (Watch highlights of Gary Pinkel’s press conference)

The biggest question mark coming into the day was St. Louis Gateway Tech’s defensive tackle, tight end Sheldon Richardson who had verbally committed to Mizzou quite awhile ago, but took a last minute trip to visit Miami.  Richardson is the number one player in Missouri and fourth in the nation (according to Rivals.com).  The other big player outside of Missouri to sign was Ohio offensive lineman Chris Freeman, who is 325 pounds from Trotman.

The Tigers scored a total of 25 players with the 23 who signed today as well as two previous recruits.  There was talk that Ronnie Wingo of St. Louis University High may change his mind, but he went with Arkansas as he verbally committed to last week.

Some of the other notable in-state signees are Blue Spring South QB Blaine Dalton, and linebackers Adam Burton from Lee’s Summit West and Andrew Wilson of Raymore-Peculiar.  The other big name was QB T.J. Moe from Ft. Zumwalt West who is coming to Mizzou to play defensive back.

More from Gary Pinkel will be posted later on www.missourinet.com