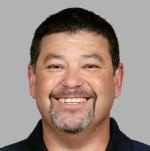 Croom most recently was head coach at   Mississippi State, where he was Southeastern Conference coach of the year in 2007 after bringing the Bulldogs from the bottom of the SEC to a 7-5 record in his third season.

Daly, who came to the NFL in 2006 after eight seasons on the collegiate level, was a defensive assistant-defensive line coach for the Minnesota Vikings. The Vikings’ defense ranked first in the NFL in rushing defense the last three seasons.

McMahon was Assistant Special Coach for the Atlanta Falcons the last two seasons after 14 seasons as a collegiate linebackers, defensive line, secondary coach, special teams coach, and recruiting coordinator.  He was at his alma mater, Carroll College in Helena, Montana, in 1992 and 1994, and was at Utah State from 1995-2006 .

Valero, who coached running backs for the Rams in 2008, is the 15 th staff addition announced by Spagnuolo since he became the Rams’ head coach Jan. 17.