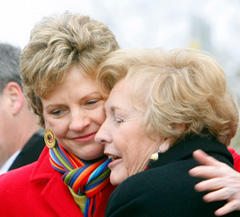 Secretary of State Robin Carnahan (D-MO) has ended the speculation, announcing she is running for the U.S. Senate seat held by outgoing Senator Christopher "Kit" Bond (R-MO). The announcement, in a YouTube video , features Carnahan saying she wants to do away with the partisan bickering that exists in Washington.

The video, which lasts just under two minutes, aslo has Carnahan talking up her accomplishments as Secretary of State, saying she has helped small businesses by cutting millions of dollars in costs and red tape. She adds she has cracked down on big financial institutions and small time scam artists. She also talks about her effort to ensure every eligible Missourian has the right to vote.

Carnahan makes it clear this will be a tough campaign, saying, "I know launching a campaign like this is no small task. As some of you know I still manage my family’s cattle farm outside Rolla. So, I’m not afraid to roll up my sleeves and work hard."

Bond, who is in his fourth term in the U.S. Senate, recently announced he would not run for another term in 2010. [ Mo. Sec. of State Robin Carnahan (L) shown hugging her mother former U.S. Senator Jean Carnahan- UPI Photo/Bill Greenblatt/FILES ]