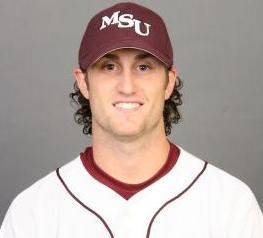 The Missouri State baseball team was a near unanimous favorite to win the Missouri Valley Conference according to a vote of the league’s coaches.  Also, senior Brayden Drake (third base) and juniors Ben Carlson (first base) and Tim Clubb (starting pitcher) earned spots on the preseason all-conference team.

The Bears earned 80 points and eight of a possible nine first place votes. Creighton was picked second behind MSU with 66 points, while Wichita State earned 63 points and the remaining first place vote to come in third. Southern Illinois (45), Bradley (39) and Indiana State (34) are expected to round out the six-team MVC Tournament field. UNI (33), Illinois State (28) and Evansville (17) round out the poll.

A two-time all-MVC selection in his career, Drake begins his fourth season as MSU’s starting third baseman after hitting .342 with six homers, 61 RBIs and 21 doubles in 2008. The Webb City, Mo., native is in line to leave Missouri State among the school’s career top 10 in numerous offensive categories.

Clubb completed the 2008 season with a spectacular 11-0 record and 2.52 ERA while earning Missouri Valley Conference Pitcher of the Year honors. He left all 14 of his starts in line for the win, struck out 82 batters and limited opponents to a .233 batting average. A native of Eureka, Mo., Clubb is a preseason All-American according to four publications entering the 2009 season.

Carlson started all 57 games as Missouri State’s designated hitter last year and batted .379 with an MVC leading 17 home runs and team-high 67 RBIs, both of which were the highest totals for a Bear since Ryan Howard in 2000. The Topeka, Kan., product has also received national recognition this year, earning a spot on three preseason All-America teams thus far in 2009.

The Bears open the season Feb. 20 at Middle Tennessee.