As Missourians deal with flu season, Governor Jay Nixon sets an example, getting a flu shot. He did so at the Cole County Department of Health in Jefferson City. 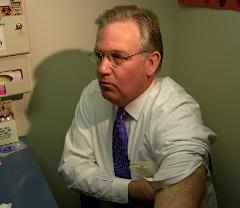 The Governor was joined by State Health Director Margaret Donnelly as he acknowledged this has not been as bad a flu season as Missouri has seen in some previous years, but there is still a flu season with which to contend and it’s a good idea to be vaccinated against the flu.

As many as 30,000 cases of the flu are reported in Missouri each year with 1,500 to 3,000 Missourians dying each year from either flu or pneumonia. The State Health Department recommends vaccination for those who are at risk, including young children and people over the age of 65.