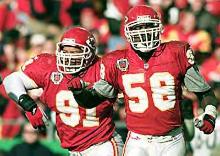 February 9th will mark the ninth anniversary of his death after he died from complications following an automobile wreck.

Thomas’ career ended while still an active player, and he is 11th in career sacks with 126½.  Thomas will be remembered for that November 11th game in 1990 when he set an NFL mark with seven sacks against Seattle, the same season he led the NFL with 20 sacks.

In a statement, Chiefs chairman Clark Hunt said, "Derrick Thomas was the cornerstone of the modern era of the Kansas City Chiefs and one of the most feared performers of his era, every head coach and offensive coordinator who faced the Chiefs during the 1990s knew when they came to Arrowhead Stadium they had to account for Derrick Thomas."