Much of the talk at the 2009 Missouri Conference on Transportation focused on the federal stimulus package and how much money might be coming to Missouri for its transportation needs. 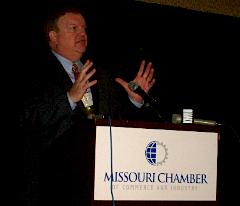 Transportation Director Pete Rahn says it should be made clear that the money being proposed for highways and bridges – about $30-billion across the country – is nowhere near what is needed. He says that amounts to about 65 percent of an annual appropriation to highways and bridges under the federal program.

“We are not going to fix America’s crumbling roads and bridges,” says Rahn, “With a $30-billion investment.”

Just how much money will be needed? Says Rahn: “If we were going to make a major impact on the state of our system in this country we need to be talking at least two to three times this level of investment to be able to see a difference.”

It is still unclear how much money Missouri can expect from the stimulus package, with no clear idea how much will be dedicated to transportation.

The Missouri Conference on Transportation is an annual event in Jefferson City. It is hosted by the Missouri Chamber of Commerce.