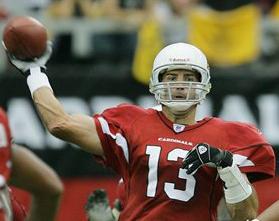 Whether you’re an old fan of the Cardinals or the Kurt Warner era in St. Louis, you’ll be interested in watching the Arizona Cardinals this Sunday in Super Bowl XLIII against Pittsburgh.  Even Chiefs fans should have an interest.

If Warner meets the Pittsburgh defense as well as he did with the media’s blitz yesterday, he’ll pick apart the Steelers.  Warner talked about enjoying this Super Bowl more and embracing all of the hype and pressure that comes along with the game.

He brought up a great point to his teammates when he told them that if they are fortunate enough to win this game, next year that ring will get them into all of the VIP parties.  So he warned on not getting too distracted from the nightlife surrounding Tampa.

Warner also said he still thinks about that Super Bowl loss to New England more than his does the win over Tennessee.  He said when you’re favored to win, there is a certain level of expectation and when that’s not met, it’s very disappointing.

Chiefs’ fans should have a close eye on Arizona’s offensive coordinator Todd Haley.  His name is getting tossed around as the next head coach.  While he said his focus is totally on the game, he said he would be excited and would jump at the opportunity to become a head coach.

A quick side note to Haley and his relationship with new GM Scott Pioli…Haley got his start with the New York Jets and worked with Pioli in player personnel.