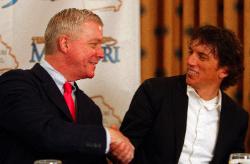 Missouri Lt. Governor Peter Kinder announced the start and finish and host cities for the third Tour of Missouri bike race which will start in St. Louis on September 7th and finish in Kansas City on September 13th.

There were a total of 30 Missouri cities who were vying for the opportunity to host the event that drew 450,000 spectators to Missouri last year and had an economic impact of $30 million to the state.

This will be the first year that the race will start in St. Louis as opposed to the western side of the state.  Only St. Louis, KC, and Jefferson City have been host sites for all three years.

Listen to Lt. Governor Kinder and former Olympic gold champion Tyler Hamilton who plans to race in this year’s event as Kinder talks about the interest, revenue, and success the race has brought to Missouri, while Hamilton talks about what the racers will be faced with.