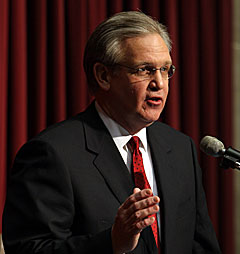 "Times are tough. We all know that."

Governor Nixon outlined his priorities for the legislative session even as the depth and length of the state economic downturn remain uncertain. Nixon concentrated on economic development during his first State of the State address to a joint session of the General Assembly. Nixon took nearly 45 minutes to outline his plans to create jobs, invest in education and expand health care to the uninsured.

Nixon, a Democrat, addressed a legislature firmly in the hands of Republicans. He called on a new tone at the Capitol, bipartisan cooperation to come to the rescue of more than 200,000 Missourians who have lost their jobs during the economic upheaval.

Nixon pointed out he has signed three executive orders to spur job creation.  The orders are designed to help small businesses and look for ways to revitalize the automobile industry in Missouri.

Missouri’s top economic development tool, the Quality Jobs Act, would be expanded under Nixon. The program provides tax breaks for businesses providing jobs that pay the prevailing wage in a region and provide health care. Nixon called for more investment in job training. He wants to create the Caring for Missourians program, which banks on colleges to focus more on training health care workers.
Nixon said his budget invests in people.

"I believe Missouri’s economic future depends on the strength of Missouri’s people," Nixon stated. "When a company wants to build a new plant or open a new office, they’ll want to come to Missouri, not just because they get the best deal, but because they’ll get the best workers."

Nixon called on legislators to put an emergency job creation plan on his desk by the time of the spring break.

Approximately 1, 300 state positions will be eliminated under Nixon’s budget.  He told legislators his budget will eliminate or cut 50 programs.

"We will balance our budget this year, next year and the year after that," Nixon said. "We won’t place the burden on the weakest among us. We won’t abandon our priorities or shared principles. And we won’t raise taxes."

Education ranks high among Nixon’s priorities. He promised to increase the basic formula for public schools by $61.7 million. He also repeated his pledge to keep higher education funding stable in exchange for a promise from college officials to not raise tuition. Also, the program Missouri Promise would expand from providing community college tuition to A+ Schools Program students to providing tuition to four-year institutions.

Nixon called on legislators to take action to reduce the 729,000 Missourians who lack health care. He called it a massive problem that cannot be fixed overnight and expressed a willingness to listen to ideas from lawmakers.

One proposal by the governor is sure to draw opposition from lawmakers. Nixon called for the reinstatement of political campaign contribution limits, something strongly opposed by lawmakers.

"By working together, we will tear down old barriers and tackle the challenges we face." [ Photo by UPI/Bill Greenblatt – Additional photos from State of the State Address]