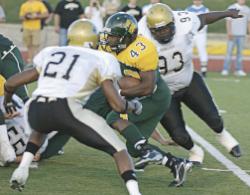 Johnson, 21, a native of Tulsa and a graduate of Union High School, was in his second full season with the Lions and had platooned as the feature back this past season. He was traveling back to Tulsa when his vehicle slid into the back of another. He was pronounced dead at the scene.

Johnson played in ten games in 2008, gaining 417 yards on 109 carries and had one rushing touchdown. As a freshman in 2007, Johnson had a breakout season, gaining 742 yards on 133 carries and three touchdowns.

Johnson was a business management major at Southern. He redshirted in 2006, before playing full-time in both 2007 and 2008.

"Renard was a very well-liked teammate, student and friend," said Lions football coach Bart Tatum. "His passing leaves a tremendous void for not only our team but the Missouri Southern community as a whole. Our prayers go out to his father, Renard Sr., and his immediate family especially, his girlfriend Courtney Johnson and his son Jockquez Elijah."