The host cities for the 2009 Tour of Missouri professional bicyce race have been announced. The event, which will begin in St. Louis on September 7th, will end in Kansas City on September 13th. In between, the cyclists will race through such communities as St. Genevieve, Cape Girardeau, Farmington, Rolla, St. James, Jefferson City, Sedalia, Chillicothe, and St. Joseph. 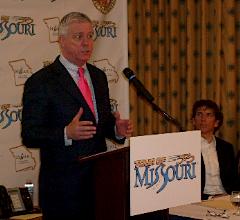 Lieutenant Governor Peter Kinder (R-MO) was joined by event organizers as he announced the list of host cities. He took advantage of the opportunity to talk up the economic benefits of the Tour of Missouri, pointing to independent economic impact studies showing last year’s Tour of Missouri rising to $30-million from $26-million in 2007.

Kinder also points out the average Tour of Missouri visitor is more affluent, and spends more time and money in Missouri than do most visitors to our state. Last year’s event drew more than 435,000 spectators over seven days.