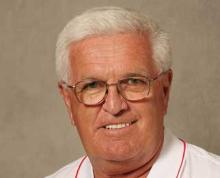 Ferraro, most recently with the Minnesota Vikings, will join the Rams defensive staff.  Leonard, who served the last two seasons on the Kansas State Wildcats’ staff, will be on the offensive staff.

"We are excited to make this announcement," said Spagnuolo.  "All three are exactly what we are looking for.  All are of high character and all about team.  We feel very fortunate to add to our staff great teachers with tremendous experience.  They look forward to getting started."

Curl, a 46-year high school, collegiate, and professional coaching veteran who was a quarterback at the University of Richmond, was the Chiefs’ assistant head coach and quarterbacks coach from 2006-08.  He came to the NFL in 2000 and worked in the Chiefs’ scouting department and also was on the New York Jets’ staff from 2003-05 as tight ends coach (’03), Senior Assistant (’04), and assistant to the head coach/running backs (’05).

Curl was an NFL Europe coach for nine seasons, three seasons as head coach of the Frankfurt Galaxy.  His team appeared in two championship games and won the NFL Europe title in 1999.  Curl was the league’s coach of the year in 1998 and ’99.

Ferraro will enter his fifth NFL season and 28 th overall.  He came to the NFL with the Carolina Panthers in 2005 as special teams assistant-assistant strength and conditioning coach.  He has been the special teams coordinator for the Minnesota Vikings since 2006.

Ferraro, who was a safety and all-New England player at Springfield College in Massachusetts in 1981, coached 23 years on the collegiate level.  He was instrumental in the development of several outstanding defensive teams during 1991-98 tenure at Bowling Green.

Leonard, who played safety at Central Connecticut State, is a 28-year coaching veteran.  He was a special assignment scout with the New England Patriots from 2003-06 and coached tight ends at Kansas State in 2007-08.

Leonard, who began coaching in 1982 at Western Connecticut, mentored tight ends, offensive linemen, and running backs from 1994-2003 at the University of Richmond.  The Spiders rushed for a school-record 3,669 yards, reached the quarterfinals of the NCAA 1AA playoffs and posted a 10-3 record and No. 6 national ranking in 2000.