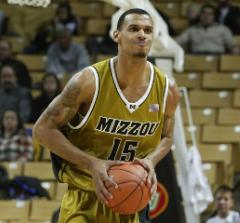 Mizzou forward Keith Ramsey who became a starter right after the Nebraska game has played well stepping into that role.  Now he has been recognized as teh Big 12 named Ramsey, the Newcomer of the Week.

The 6-foot-9, 210-pound forward got a shot to start based on his defensive abilities, but he’s also done well offensively as Missouri won at Oklahoma State (97-95) and against Texas Tech (97-86).  The junior averaged 10.5 points and 4.5 rebounds in the two wins, while shooting 56.3 percent (9-of-16) from the field.  He also had three assists and three steals.

Ramsey has now started four consecutive games for the Tigers (4-0) and posted his first two double-figure scoring efforts of the year during that stretch.  He has also shot 50 percent or better from the field in each of the last 11 contests.

You can listen to head coach Mike Anderson from his weekly teleconference as he talks about Ramsey and the strong defensive effort the Tigers have given.

Missouri Basketball (17-3, 4-1 Big 12) returns to action on Wednesday at Kansas State. The Tigers are looking for their first win in Manhattan since the 2003-04 campaign. Missouri will then return home on Jan. 31 to face the Baylor Bears in the annual "Blackout Game". Fans are encouraged to wear BLACK to that contest and fans can purchase four upper-level reserved seats for just $60.