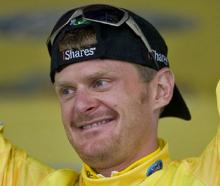 Floyd Landis, who won the 2006 Tour de France, and was later stripped of that championship for a failed drug test is rumored to race in the 2009 Tour of Missouri bike race, according to several sources.

Next month, Landis will race in the Tour of California race, his first road race since his two year suspension.  Landis had a high testosterone/epitestosterone ration following the 17th stage of the Tour de France.  He got the two year ban after an arbitration panel voted against his appeal.