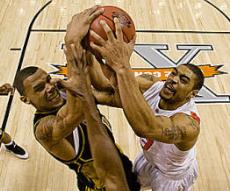 Wins on the road in the Big 12 are tough to come by and the Missouri Tigers almost let one slip away last night in Stillwater, OK.  Mizzou held off a late Cowboy charge to win 97-95.

Mizzou was up 91-76 with just over four minutes to play.  OSU outscored the Tigers 19-6, with Mizzou getting those final points from the free throw line to hold on for the win.

The Cowboys had chance after chance in the final two minutes to tie or take the lead down but couldn’t connect.  DeMarre Carroll and Matt Lawrence each scored 19 points for Mizzou.

Leo Lyons hit a jumper with just under ten minutes to play in the first half to put the Tigers up by as many as 16, 31-15.  A lot of fouls in this game as Mizzou would go to the line 30 times, OSU a total of 39.  The Tigers showed they are more than just a three point shooting team, although Lawrence was 5 of 8.  The Tigers shot 52% from the floor and hit their free throws down the stretch.