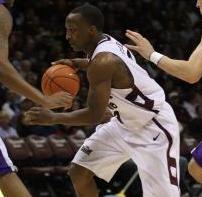 The Bears shot a season-high 47.4 percent from the field behind another season-best 27 field goals to secure their second conference win in three tries.

Missouri State jumped out to a 13-6 lead as senior Wade Knapp scored 11 of the team’s first 13 points. Drake fought back to make it 21-20 game on a free throw by Josh Young with 2:47 left in the half. After Young missed the second free throw attempt, Cardell McFarland connected on a jumper for Missouri State to make it 23-20. Moments later, Cooks extended the MSU lead to 25-20 with a jumper of his own, and the Bears went into the break with a 25-21 lead.

Knapp finished with 13 points for the game, while McFarland scored 10 — his first double-figure scoring output in eight games.

MSU stormed out of the gates in the second half with a 13-2 run to build a 38-23 lead, capped by a traditional three-point play by Cooks. McFarland added three-pointers on back-to-back possessions to extend the lead to 47-27 with 10:22 to play, and Knapp’s bucket at the 9:45 mark built the margin to 22 points.

Missouri State got a career-high 11 rebounds from Kyle Weems who added seven points, while Shane Laurie scored nine, and Justin Fuehrmeyer had nine assists. Isaiah Rhine was in Missouri State’s starting lineup for the first time since the season opener at Auburn and finished with a pair of rebounds.

The Bears attempted just five free throws in the game, making three, and outrebounded the Bulldogs 42-28.