Governor Jay Nixon (D-MO) tours the state to make a promise regarding higher education. Nixon is vowing that his State of the State Address, next week, will contain a pledge ensuring public four-year colleges and universities will receive the same appropriation in the 2010 fiscal year that they received in 2009. 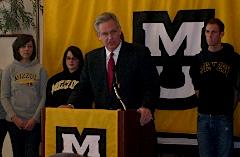 In exchange for the guarantee of no cuts, these institutions must abide by a pledge not to raise tuition or academic fees during the 2009-2010 school year.

Asked where the money will come from during tight economic times, Nixon stated that to turn around the state’s economy, Missouri must have a well-trained workforce that is prepared for the jobs of the future, with each student having access to an affordable four-year degree. Nixon says he will unveil details of where cuts in other areas might be made when he delivers his State of the State Address next Tuesday.