The same day the nation’s first black president took office, so did the city of Festus’ first black mayor. 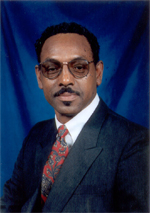 The timing was by design, said former mayor Gene Doyle, who planned to step down during Obama’s inauguration.

Doyle says he thinks Cook is the right man for the job and as city councilman was always willing to serve on the tough committees and put in the work that it takes.

Police Chief Tim Lewis and Fire Chief Charlie Casey, both African American, say the timing is right for Cook to be mayor. Casey says everyone is ready for change, and that it’s not just a black and white issue.

Cook’s daughter and grandchildren were there to celebrate the historic instillation.

Cook’s daughter said he’s always been for positive change. From the kids, "rock the world" and "rock Festus" is their advice to their grandfather.

Cook becomes not only the first black mayor of Festus, but the first in Jefferson County.

Cook seemed almost at a loss for words at the event, saying, "It really hasn’t set in yet."

Cook, 69, is retired from Dow Chemical.