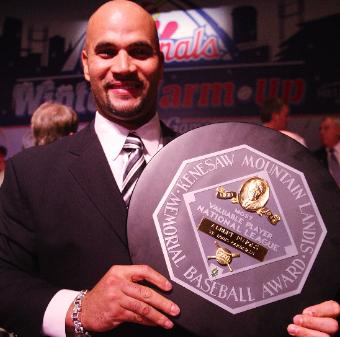 Albert Pujols and Yadier Molina received their awards for League MVP and NL Gold Glove for catchers yesterday at the annual baseball writer’s dinner in St. Louis.  Pujols said he is healthy and plans to play in the World Baseball Classic in March.

Pujols had elbow surgery to move a nerve, an injury that has bothered him for the last few years.  He says he’s been swinging the bat and throwing this winter.  Unless, he feels that something is not right as he begins spring training, he plans on playing in the exhibition representing the Dominican Republic.

As of now, the Cardinals that are on the provisional world rosters include:  Pujols, Molina, Ryan Ludwick, and Joel Pineiro from the major league roster.

Here is the full list of major leaguers and prospects on the world rosters.