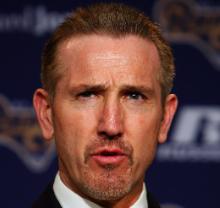 The Rams, who have gone 5-27 in the last two seasons (lowest in the NFL) announced former Giants defensive coordinator Steve Spagnuolo as their new head coach today.  Listen to Spag’s first comments as coach.

Spagnuolo mentions several times that building a winning team is a process and it’s something that will not happen overnight, but he’s committed to success.  He’s willing to take time in putting together his coaching staff and isn’t concerned that as of now there are nine new coaches (including himself) who are putting staffs together.

For more on what Rams fans can expect from Spagnuolo (pronounced Spag-NO-LOW), click below.