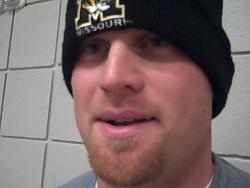 The Cardinals held their Winter Warm-Up in St. Louis this weekend and at the same time Kyle McClellan and Colby Rasmus led a group of Redbirds at an autograph session at Mizzou Arena on Saturday.  McClellan talked with me about the upcoming 2009 season.

McClellan has been preparing this winter to come into spring training as a starting pitcher.  He started in the minors, but came out of the bullpen in his first season in the majors last year.  The Florissant native appeared in 68 games for his hometown team and went 2-7 with a 4.04 record.

McClellan talks about his off-season and the prospects of the closer’s role with Jason Motte, Chris Perez, and Ryan Franklin all battling for the job after the Cardinals were unable to find a closer outside the organization.

Last year, McClellan himself was 1 of 6 in save opportunities.