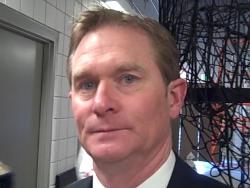 Mitch Holthus, the voice of the Chiefs Radio Network was at Mizzou Arena on Saturday calling the Mizzou-Iowa State for television.  After the game, I bumped into Mitch and talked with him about the hiring of Scott Pioli as GM.

Find out what play by play guys do after a broadcast.  Click to watch the video.

Holthus, called it a home run, saying Pioli was one of the most sought out GM candidates in the last four or five years.  Holthus says it really says a lot about the Chiefs as a organization that Pioli would choose Kansas City over other teams.

I didn’t ask Holthus as to whether or not Pioli should fire Herm Edwards, but asked him the benefits of keeping Herm around and Holthus pointed out that when Herm as has a good quarterback, he’s been a successful coach.

With the number three pick in the draft, could the Chiefs go after a QB like Mark Sanchez from USC?